The Truth! - From a Certain Point of View!

Is it okay to lie?
A rather loaded question, and certainly good dinner time conversation because it really has more theories than answers, and no matter what anyone thinks it's just their opinion based on what they think or believe. Is it the truth? Who is really to say.
Now should you lie?
Lying has such negative connotations, try to simply tell the truth from a certain point of view. Be creative because you can justify just about anything if you really set your mind to it. Look at some of the bloggers out there, Left wingers think that all the worlds problems come from Right wingers(actual quote that comes up quite often "Just when you think the GOP couldn't get any slimier--), Right wingers think all the worlds problems come from Left wingers, and leads people to use such silly words like rant.

So who is telling the truth?

Let's explore the theories with these examples-

I think the Green Bay Packers are the best football team to WATCH in the NFL! Not only do they have players(Brett Favre! But not singling anyone out) and talent that are fun to watch, they have history. They are the only founding team to still be in their original city(Cardinals and Bears are technically older, but started in Chicago and Decatur, even though Green Bay for their first 75 years played a third of their home games in Milwaukee). Even the way the organization is set up they are an underdog to the other franchises, and they sell out everywhere they play, an intrasquad scrimmage, preseason games, and on the road, etc. They could have a neutral site game in South Dakota and it will sell out. Now is that the truth? The truth as I see it for the reasons explained. God help them, but there are people who actually like the Vikings(especially in South Dakota) that may disagree with that, and either give me their truth, or just say that what I said was my opinion.

Fictional example-
Obi-Wan Kenobi (Ben at the time) was asked a direct question from Luke Skywalker "How did My Father Die?"
Now you can go back to your dinner time conversation about whether to lie or not in this situation. You could be brave and tell the complete truth(you would kind of expect that from a Jedi wouldn't you?), but remember Luke has been isolated from the goings on in the universe at this time.
"Your father was the chosen one to bring balance to the Force, but something went wrong and he turned to evil and he helped kill all the Jedi and your mother for that matter, and in order for that prophecy to come true, I need to train you as a Jedi so you can kill him and his master, and bring the Force back into balance." Now do you think that would have worked? Obi-Wan then did what you expect an exiled Jedi to do and tell the truth from his point of view. "A young Jedi named Darth Vader, who was a pupil of mine before he turned to evil, he betrayed and murdered your father!"
Pretty powerful if you think about it, it doesn't destroy the image Luke has of his father, and it preserves the good feeling Obi-Wan has about Anakin before he turned(Obi-Wan also doesn't have explain the fact that he almost killed his father). Luke eventually finds out the "real" truth and is pretty ticked! But gains perspective and basically learns on his own how to become a Jedi, and by not following in his fathers footsteps, uses the truth against him in their final battle in front of the Emperor. By not giving in to anger and hate(for the most part, turns out he's pretty sensitive about his sister), he becomes powerful enough to know that there is still good in is father, so when he defeats Darth Vader, he sacrifices himself in front of the Emperor so that the only one who can save him is Anakin. Luke could not have done that without knowing the "real" truth, but if he learned of all that at the time he asked the initial question, it may have been too much for the young lad to take, and would have gone crying back to his Uncle's moisture farm who at that very moment was being slaughtered by Imperial Stormtroopers.

Theological example -
This is a touchy area, but I feel obligated because I get so many hits from Google to this site from a post I wrote when Dr. Gene Scott passed away almost two years ago. Not because of him but that fact that his much younger wife(red flag!) Melissa had taken over the Church, and that Melissa had an AKA(FLARE!!) Barbi Bridges! Anyway I received many comments on that post(and still do) including this one from Gerald Krug:
"I know some of the insides of the ministry and as my daddy said to me,"Son,you can't live your whole life on B.S.", so tell me how did this ministry survive? Try by truth.

Yes, but who's truth! What is the truth and from who's point of view. Not I'm not going to say that Dr. Scott lied, and I'm not saying that Melissa is lying now. I find it refreshing that the very few sermons I've seen Melissa do, she has brought up the topic of sin. Go with what you know! Who better to preach about sin, and in turn who better to preach about forgiveness(if she's ever asked for it).
Like everyone else I have questions about Life, the universe and everything and when I first started on my task I was on the quest for the truth! And that's why I didn't want to go to a Church, because technically a Church is not based on truth, but on Faith. The quest then went from the "truth" to the quest for knowledge. Knowing things in turn helped me sort out falses more than finds truth, but that's a far better starting point than trying to sort out truths from so many points of view. Leading to the point of view that with knowledge comes wisdom. Not sure how well that has worked out for me, but it hasn't affected my sense of humor!
So from that and as a thank you to Gerald for commenting, and to all who are so fascinated with Melissa Scott, I say this. I don't know if Dr. Scott was truthful, but I do think he was knowledgeable, and had a pretty good idea what the falses were.
So in conclusion(finally), if you think someone is lying to you, don't call them a liar. Don't call them a truthful person from a certain point of view. Make them squirm, get as much knowledge as you can, and find out what the falses are(left & right wingers please take note!), and go from there.
Just look what gaining knowledge did for Luke Skywalker, the universe is now a much better place!

So What's Holding YOU Back? 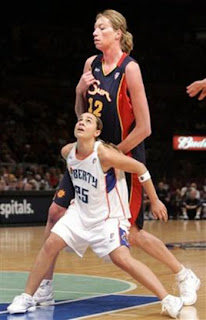 If you are looking for something different and easy for your Super Bowl party, or if you are ever having a special someone over, I have a great recipe for making your own pizza. I've had this recipe stored on my stumbleupon page for sometime, and finally had some spare time to try it out. 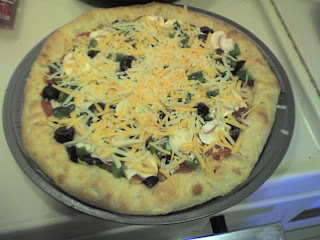 Above is the before photo. 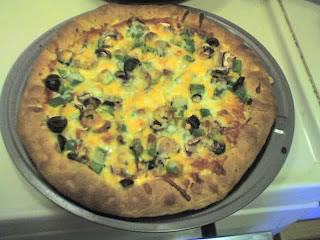 Above is the after photo!
I was surprised how easy it was to make, and how quick. The whole process only took a half an hour and it only took that long because it was my first time with this recipe. I make a mean Mac & Cheese, but I am no chef, and I was able to put this all together. 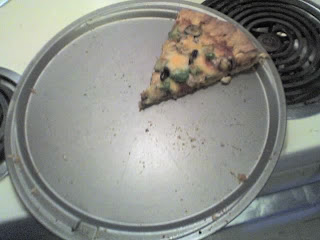 Above is the after, after photo! I guess I like it.
Check out the recipe for yourself here, and let know what other toppings would be good!
at February 02, 2007 3 comments:

You Can Have the Chair Back, When We Get New Kitty Litter! 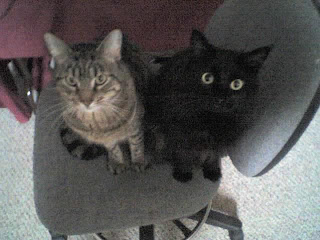 It's hard to update a website, when your chair is constantly being held hostage!
at February 02, 2007 No comments: