The Day the Earth Shook Still! 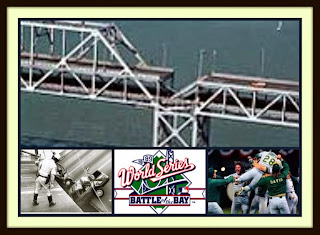 Today is the 25th anniversary of one of the longest days of my life. Never did I feel like I was in danger(except maybe for 1 sec when I realized I was underneath a Candlestick Park Light Pole) and nobody really panicked. There was no facebook or twitter or text I could send to my mother to say I was ok. Just a couple helicopters and a Goodyear blimp sending pictures that I could see off Ray Fosse's Watchman(yes a watchman)! I made it back home the next day and the only thing that changed me was to be more aware of my surroundings. Because a few things that I had noticed earlier that day for the first time were gone by days end and I never would have known them.
My only words of advice moving on is that you can do everything right or you can panic and worry and complain that something is going to get you, but it doesn't matter. Everything can change in an instant. Just know that when the time comes you did the best you could do and tried to enjoy as much of it as possible.
That could have been my worst day, but it's a day I will always remember.
PS
I went back to Candlestick a month later and had the best day ever when the Packers beat the World Champion 49ers 21-17 with the Majik man and had a beer with Max Magee!
at October 17, 2014 No comments: