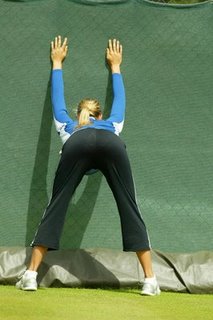 Now I try my best to keep things tasteful on this site, and I will try and continue that tradition. However I'm still a guy, and when I was floating around looking at sites tonight and came across this picture, I naturally had some reactions.
Like:
"Hello!"
"You have the right to remain silent!"
"Rough Night Last Night?"
"You really should see a doctor about those hemorrhoids!"
Well my imagination could run away if I let it.
I have to admit I have matured a little as I get older, but it's still nice to know I can have some evil thoughts every now and then.
If this gave you any evil(but tasteful) thoughts feel free to let me know.
Thanks to 1 Cup Humanity, 1 Cup Profanity for the photo and the thoughts!
Until next time.
at July 17, 2006 1 comment: 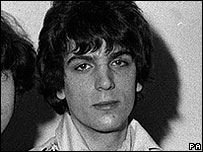 The news of the passing of Pink Floyd original front man Syd Barrett has left me with a few philosophical questions.
Why would someone have to suffer to allow others to prosper?
Think about it. If Syd had not "suffered" and became mentally unstable from, according to the official version, pressures of fame and drug use(while members of the group admit he would have had a breakdown regardless of the drug use) would we have the Pink Floyd that came to be.
Would a Syd Barrett led Pink Floyd create a "Dark Side of the Moon"? What then would be the inspiration for "Shine On You Crazy Diamond" or arguably the groups best song "Wish You Were Here"?
One could argue the latter was the result of perseverance of the remaining members, and that you can't cry in your coffee, you must do what you feel is right and move on.
Or you can argue that is was all fate, and that Syd and his "collapse" gave the band the name recognition or stigma the band needed and used it to jump start their careers and they never let you forget that, hence the reason for "Wish You Were Here".
Either way(or neither) one mans suffering in this life in now over, and the rumors will now fly on whether or not the band will get back together(again) in tribute.
While I don't like rumors or phony like tributes, but in this case it maybe necessary.
Pink Floyd's reunion last year was to help in the cause to bring awareness for the plight in Africa. This time they could help bring awareness to the suffering of mental illness and the awareness that without Syd, there probably wasn't a Pink Floyd.
at July 11, 2006 1 comment: