Where No One Should Go Before(or Ever)! 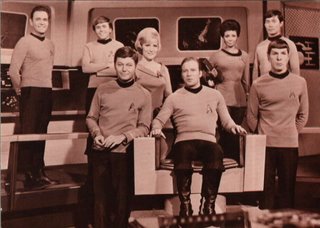 Let me give you a little insight on what inspires me to write articles these days, and what the basis for The Radioaffliction was/is.
I get up early in the morning and I read the funny papers(newspapers, mostly online now with a real nice RSS reader), and browse through the headlines looking for stories that will give me a certain reaction, for which I will post my point of view in the hopes that others will comment with their thoughts and in the process all of us gain a greater understanding of such matters.
The particular reaction I look for is as follows. I sit down at the computer and start viewing articles. I also have my powdered vitamin concoction that I mix with water and I drink that as I view the articles. If an article makes me do a spit take of my vitamin concoction, then that's my post/thought of the day.
So is the case this morning when I read this article from Reuters.
It seems that Viacom, parent company of Paramount is interested in reviving the Star Trek franchise. Do they want to do a new movie with the Next Generation cast? NO. Let's cut to the chase, Do they want to do anything with any of the recent spin-off casts? NO!
This is how original and fresh they want to continue with the series.
Go back in time and show how Kirk and Spock first meet at Starfleet Academy and their first outer-space mission. An idea according to my Uncle John's Bathroom reader that was first proposed(and rejected!) way back in 1990 as a plot for Star Trek VI.
Right off the bat many Star Trek fans even casual observers like me can tell you the problem with that plot right now.
Kirk and Spock didn't meet at Starfleet Academy, in fact Kirk was one of the youngest Starfleet Captains in their history and Spock graduated from the Academy in only three years, and served with the previous Captain(Pike) for many years prior to Kirk's arrival. All those times when Kirk would say, "He was my instructor at the Academy." Not once did Spock say, "Oh yeah, I remember him."
Now since the high salaried execs at Viacom are having a difficult time being creative or even remotely original, let me give them my ideas for a New Star Trek for free, just to help them get the ball rolling.
Don't go back or forward in time. There is an estimated 86 year gap between the original series and The Next Generation. FILL IN THE BLANKS!!!
You can even use members from the original series(that are still alive) to help kick start. Heck you can even revisit old planets that the original crew visited, make sure everything is going well(remember what happened with Space Seed, it led to a Wrath of Khan!).
Besides it's not really so much of about the characters, it's the stories that are the most important. In fact one could argue that Star Trek is one of the greatest modern Mythological tales(although Star Wars fans may disagree), and I believe I'm using myth in the proper form. A fictional or enhanced story with a moral context. Go back and look at the 79 original episodes and you will be able to find the story within the story, and once you find that you begin to understand how to live a more fulfilling life for you and others.
So come on Viacom, show us that there is intelligent life in this universe, and that as we move forward into the future we are not always looking back.
A New Star Trek or NO Star Trek!
Have a nice Day,
PAC
at April 21, 2006 1 comment: