Find a Penny? Pick it Up!

I enjoy the site Gullible Info, and it is there I found this interesting tidbit.

"People in a west coast city are three times more likely to stop and pick up a coin on the street than people in an east coast city."

Now that may only mean that a west coast city is three times more likely to lose a coin on the street than an east coast city, but it does beg to offer this question.

If you saw a coin on the street(or sidewalk), why wouldn't you pick it up?

Even the lonely penny(it's real name is the one cent piece, pennies come from England and heaven I'm told), which it's existence is mind boggling to me, especially since it costs more to make it than it can be tendered for, not to mention how long retailers have been duping people into believing that it's a better deal that something is $4.99 rather than an even $5.00, with all that said, the penny is still worth something.
There is even an incentive for the stray coin,
"Find a penny pick it up, the rest of the day you'll have good luck!".
Others have amended that by saying the coin must be heads up but hey, you've got an opportunity here. I've struggled with that theory when I come across one in a urinal, and I'm forced to think just how badly do I need good luck for the rest of the day.
Anyway the point is, coins come in handy, and they add up, so if you see one that has lost a home, give it one until you can find a nice cash register for it.
One other thing that still boggles my mind, is that how many people still don't know that the two dollar bill is still in active circulation, and yet it is still being rebuffed by the general public.
I wrote about that last year in a post, and I still can't figure it out. 2 is a nice even number, and can be very helpful is cash situations. I would rather have 2 two dollar bills than 4 one's, and heck I'd rather have 3 two dollar bills than a 5 and a 1.
It is after all just my opinion, but the lesson learned today, love and take care of your coins and your two dollar bill!
Have a great day,
PAC

Going Where No One Should Have Gone Before

Earlier this year I posted "Where No One Should Go Before(or ever)!", in which I discussed the audacity of Viacom/CBS Paramounts decision to bring back Star Trek with an all new cast playing the original characters with the major plot point being how Kirk and Spock met at Starfleet Academy(which they didn't, I don't care what some of these Star Trek sites say. Spock was on the Enterprise at least 13 years before Kirk became Captain).
My two major points were that you couldn't have new people playing established characters and bring any credibility to the story(or the actors playing them for that matter), and you had an estimated 86 year gap between generations: Fill it!
Then I discover that Cawley Entertainment Company and Retro Films Studios have for two years been doing what CBS/Paramount only plan to do with Star Trek: New Voyages!
Instead of going back to the early days, they are continuing with the original five year mission, essentially picking up where the series left off, even revisiting some old episodes(another suggestion I made in my earlier post), using the original blue prints for the set, an original writer from the series, original bit actors that appeared and original guest stars, and now even original cast members! In fact the show is so faithfully done, that you almost forget that these are just people playing costume.
Almost!
James Cawley makes a good Captain, but he is not Jim Kirk, and John Kelley's "Damn it I'm a Doctor" impression is just embarrassing, and don't get me started with Charles Root's performance as Scotty. I'm not really saying the performances are bad, it's just that doing it this way doesn't allow the actors to establish their characters, it forces them to act like the characters as we remember them. The one exception so far would be Andy Bray's performance as Pavel Chekov, especially in the episode "To Serve All My Days" only to be out done by original Chekov actor Walter Koenig, who should win some sort of an award for best supporting actor, only proving the point that the only people who should play those parts are the ones that actually played them.
Check them out for yourself at http://newvoyages.com and tell me what you think, but in my opinion with the performances which are faithfully done(almost to a fault), and stories that are too good, even the special effects are too good for the original Star Trek, I am forced to stick to my original conclusion:
A new Star Trek, or no Star Trek.
PAC
at December 16, 2006 2 comments:

Stumbled upon this, and got physics, philosophy and Indentity Theory all in one lecture.
Enjoy,
PAC
at December 15, 2006 No comments: 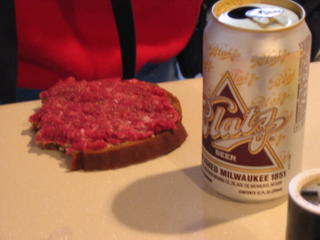 The past month has been nothing but visiting family and friends having family and friends visit, and when that much family gets together a certain point comes along when requests are made like, "We should do this more often", and "Answer your damn phone!"
But my family and most of my friends are a little weird and the most requests I got during the visits were asking if I still had the video of my cousin Jim making and eating a raw beef sandwich!
And I replied, "Of course I do!", and since The Radioaffliction is a public service, and it's iTunes link has expired I have decided the world should never forget "How to Make and Eat a Raw Beef Sandwich!"
First watch the video, then if you are not grossed out and you want to make and eat your own raw beef sandwich here is Jim Reid's recipe in order:
1 slice of Rye bread buttered(or use I Can't Believe It's Not Butter or if you can find it I found that "Move Over Butter" works really well).
1 Package of Ground Round(Please don't eat the whole package, just enough to cover the slice of bread).
Seasonings: Salt & Pepper(seasoned salt works very well too).
Optional Items:
Slice of Onion
BLATZ BEER(Optional?)!

There you have it, just in time for the holidays!
If you could be so kind once you have watched the video, if you could write a review for it here. Thanks and enjoy!
at December 14, 2006 No comments:

The Radioaffliction Vol.5 is finally here!

In this edition, my brother Adam Clay joins me as co-host as we discuss the following topics.
* Should I apologize for not broadcasting/podcasting in almost 6 months.

* We review the blog Lost in Wisconsin! (can you really be lost if you know where you are?)

* What qualfies a city to be called a suburb?

* We discuss the book from Dorene M. Lorenz, and how to find ways to write a book, and the merits of self publishing.

*Plus much, much more!

You can download or listen to the show from iTunes, or click on the above link to play it in your browser.
Enjoy, and please tell us what you think of the show!
at December 13, 2006 3 comments: