What are You Going to Watch Tonight?

This is a follow up to this article I wrote earlier this year about how far cable/satellite networks will go(sink) to somehow in their minds obtain a reasonable amount of the market share audience.
Let's go to the TV grid tonight:
I'm not sure about your cable/satellite lineup, but on my system the crummy AMC(formally the great American Movie Classics) and Turner Classic Movies (TCM) are back to back, and tonight both channels are taking advantage of Peter Jackson's new King Kong by showing "classic" versions of the famous monster.
Here is the Difference and I ask what would you watch?
First AMC will play the 1976 version with Jeff Bridges and Jessica Lange(babe, but no Faye Wray) edited with commercials or flip to the next channel and watch the original 1933 Faye Wray(babe, but no Jessica Lange) classic, unedited with no commercials.
Honestly I won't watch either one, but if I was forced to make a choice like I'm forcing you to make one, I would choose the original on TCM. Basically because of no commercials. While it's true that the original is also probably a better film, because the 1976 film was pretty crummy, but that really factors little into my decision. I'm actually in favor of a network that wants to show crummy movies. Sometimes I'm really in the mood for them. I extremely object to crummy movies edited with commercials. In fact there are way too many commercials(and don't forget infomercials) on cable television for a service I already pay way too much for, and it's not just the crummy AMC.
Fox Sports Net(FSN) has a good Poker information show on called Learn From The Pro's, which is already a walking ad for Full Tilt Poker, as soon as the show gets interesting the idiot announcer(self-proclaimed) annouces that they "have" to take a break. How about not taking a break.
The worst offender I've noticed lately comes from MSNBC. Have you ever on purpose tried watching Chris Matthews' Hardball? I usually catch the show while flipping channels, and I was always wondering why he was talking so fast all the time. Well, because he is always going to commercial break. I displayed some patience the other day and actually timed out segments, and it came out to four minutes of programming to four and a half minutes of commercials, almost five if you count other MSNBC promos, and don't forget news updates at the top and bottom of the hour, you're only getting almost a half an hour of the actual show!
Ever wonder why people are giving away (and taking) content on the internet?
By the way, The Radioaffliction does not have commercials(just "humorous" segments to help break up segments).
Like I wrote in May, be different. It's okay to play crummy movies, because it's good to have a niche. But if you want to attract an audience (and keep them), just give them what they came for. The crummy movie!
Have a wonderful day,
PAC
at December 13, 2005 1 comment:

Get a New Plan Stan! 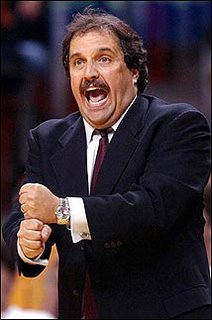 I'm in a sports mood today and I'm shocked to hear the news about Stan Van Gundy. I'm not shocked that he is out as coach of the NBA's Miami Heat, nor am I in shock that former Coach Pat Riley is taking over. I am shocked that by now Van Gundy has not spontaneously combusted.
Maybe it's a little personal because for one shining moment Van Gundy was the head coach at the University of Wisconsin when Stu Jackson decided he was too good for Wisconsin after leading them to 1 NCAA Tournament win(in fairness it was their first win in the tournament since the 1940's), and in my opinion only Van Gundy is the biggest Freakazoid in Sports.
What inspired me to write this article is the fact that it is not very often that I agree with or for that matter even listen to ESPN's Steven A. Smith. HOWEVER!
I am in complete agreement with Mr. Smith that Van Gundy will never be accepted as a NBA coach(or any other coach) until he learns how to relax. He is constantly moving up and down, screaming and yelling at officials, players, mascots, and whatever is in his path, and the worst part was he was always in this big pool of sweat!
When he was at Wisconsin, I wanted the Badgers to win, but I just couldn't stand watching this blubbering, blithering, blathering sweat monster parading the sideline.
So my advice to Mr. Van Gundy is, take some time off, enjoy the holidays, find the BIGGEST Chill Pill you can find, and CHILL THE @#$%& OUT

*Intro- What is The Radioaffliction? And how YOU can be part of the show!
*Pete goes through his Spam folder in search for holiday gifts.
*Rick Harrington's Theater of Masterpiece: Please Continue!
*Pete Interviews himself(?) about a news story about his neighborhood.
*(Former)Co-host Rick Harrington(& wife) joins the discussion about neighbors,speed traps & more.

If you have never listened to a podcast before(especially this one) please give it a try, and tell me what you think in the comment section.
Enjoy!
at December 06, 2005 No comments: 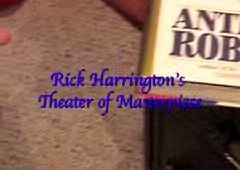 In this Premiere episode:

*The Tabernacle Ballet Presents Frog Lake: A beautiful ballet played to J.S. Bach's Toccata & Fugue in D minor(?). (actually just the Toccata, and keep your eye on the background as a young man tries to hide a prop).
*Rick shows the latest Christmas gifts for kids in Consumer Corner.
*Rick interviews a British Designer(with a bad French accent) on the lastest in Fashion.

It Can Always Be Worse!

Greetings and a happy holiday season to all! I'm back at it after a three week break from blogging and podcasting to write a novel in thirty days, deal with a death in the family, and start training for a new job for the holiday season.
Well the novel didn't get finished, but the first part is done and an outline is completely done, so what was stuck inside my head for over a year is now out. It could be worse(I have ideas stuck in my head for over twenty years!).
A death in the family is never easy, but in my experience with death, it's dealing with the people that are still alive than coping with the loss of the person who died(although I have to admit that losing a child and a parent did suck). But in this case all pretty much went well. In fact I had a little bit of a chuckle when my family wrote my grandmothers obituary and said that she died unexpectedly at age 93. To me I'm just not quite sure how unexpected it is that a 93 year old person dies. You've got to come to terms with the reality of the situation at some point when a loved one or anyone gets that high on the odometer of life, don't you? Not to suggest that someone could die expectedly(Fred died expectedly today at age 52), but if you really think about it, death is certain and depending on what you believe, it's part of a master plan, so in fact it maybe possible to see an obit that said that Fred died today as expected at the age of 52.
Anyway I'm getting sidetracked, dealing with the family was pretty good actually, it could have been worse. However many things with the family is to be determined. Like what to do with the family house and all the stuff in it, so stay tuned.
Then there is the job for the holidays, and while the extra pay is nice, it's a pain in the butt to get to, since I'm determined not to get a new vehicle until gas prices go back to a reasonable rate(actually it's the cost of insurance that I'm truly offended by), and people become more responsible with how they use their vehicle or this spring! Since Madison has a wonderful transit system I use that, and what would normally take twenty minutes to get from point a to point b, now takes an hour and fifteen minutes. Then I get to work and I'm on my feet for eight hours straight with maybe a twenty minute break in there somewhere, but it's really pointless, and while the people there are fairly nice, they don't really give a crap about me. I work in one company, but I'm supposedly paid by another so they have the attitude that "Hey, you're somebody else's problem", and not really going out of their way to make sure I really know anything, just do your job and go home. And that's fine with me, I meet some really nice people along the way, and that makes the time go by pretty fast, and hey, it could be worse. I was checking out the goings on in my old town of Denver, and caught this article from the Denver Post about a couple of window washers who got stuck when their scaffold stalled twelve stories up and then the wind kicked in and gave them the ride of a lifetime. Check the article out there is video footage as well.
So to wrap this up, if something in your life is not going as planned remember it can always be worse, and that you have the ability to change it anytime you want. Just like George Carlin used to say when he was funny, "If you don't like the weather where you live. MOVE!"
Have a wonderful day,
PAC
at December 02, 2005 No comments: